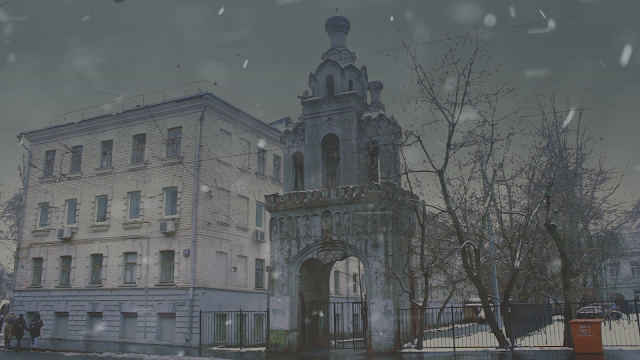 Following on about The Bell Tower footage. At the moment I am colour grading the footage and gradually getting an edited copy which can be integrated or used in the film Eisenstein and the Russian Avant-garde I wrote a post about this small monument in Moscow, an old bell tower This is the belfry of the lost Old Believers Church. This building in the XIX-early XX centuries was in the possession of the merchants Karasev, known for their attention to the fate of the Old Believers in Moscow.  I will probably use this footage in the Ivan the Terrible section of the film and perhaps in other sections of the films if it is appropriate. Very much a phase of slogging through the material for the whole film, colour grading, repairing and computer enhancing some of the graphics. Not surprisingly I have  learnt a great deal about Eisenstein and the milieu in which he worked and which I will write about later especially in relation to the Russian avant-garde which is the main focus of the film
Post a Comment
Read more